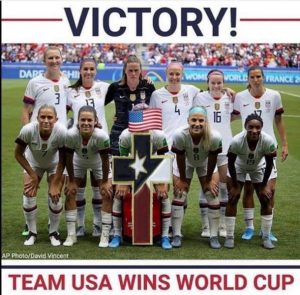 The dirty Police State Bastards (Hebrews 12:8) at Face Book took down the photo that I posted of the Women’s Soccer Team with the America Hating, Purple haired, Lesbian blocked out!

I have seen many like that with a notice that it is “unavailable” or that the poster had “Removed” It. NO I DID NOT REMOVE IT, THEY DID!!

So I posted it again and the Communists will probably ban me now!! I even replied to my own post with the pic in the reply and they black holed that one!

Fight back against these Communist Bastards people. They ARE YOUR ENEMY and need to BE TREATED AS SUCH!!