Answer: When you whack any bee hive with a stick, everything from the inside comes out (except for the Queen and a few drones) and attacks with a vengeance beyond anything you have ever seen before! 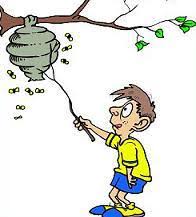 I spent 1/3 of my early years on a dairy farm where I had ample opportunities to learn a thing or two about bee hives. I ran into many a hornets nest while mending fences. I learned really fast just what happens when you take up a stick and give a hive a whack!

A small part of an ENORMOUS hornet’s nest was uncovered when President Trump, then Candidate Trump announced he was running on the GOP ticket. Candidate Trump spent the primaries whacking a stick at one side (supposedly the friendly side), of that HUGE nest. His efforts exposed some rather large hornets and as a result he got stung a bit. When he was declared the winner of the nomination, that nest got really stirred up and even more hornets came out. Fired up and buzzing like crazy!

Trump’s whacking away at the nest during his campaign really stirred up the evil insects inside. Winning the election, was the equivalent to failing to run away to avoid getting stung. Now the whole nest of nasty’s smell the Pheromones that were released by the Clinton/Bush/Obama/Soros Cabal! The WHOLE SWARM is now out to get him, and those of us who support him!

The Vegas Massacre is a result of stirring up that Globalist Cabal bees nest!  Please bare with me and consider this.

The Nuts do not Fall far from the Tree

MK Ultra, CIA and other shadow government devils know who the NUTS are. They harvest (recruit) them, condition them, and then release them when needed!

More is coming to light about the Mass Murder as the hours and days go by. This massacre has the smell of a false flag by the aforementioned devils!

WASHINGTON, Oct 2 (Reuters) – Two senior US officials said on Monday that there was no evidence that the shooter who killed at least 50 people in Las Vegas was tied to any international militant group.

Islamic State issued a statement through its news agency Amaq claiming responsibility for the shooting, saying that the attacker had converted to Islam a few months ago.

But one of the two US officials discounted Islamic State’s claim of responsibility and said there was reason to believe that the shooter, whom police identified as 64-year-old Stephen Paddock, had a history of psychological problems. Read more here.

The father of Las Vegas gunman Stephen Paddock was on the FBI’s Top 10 Most Wanted list, the agency confirmed to NBC News.

Patrick Benjamin Paddock, also known as Benjamin Hoskins Paddock, was wanted by the agency for escaping from prison in 1968, where he was incarcerated for armed bank robbery. He was diagnosed as psychopathic, with suicidal tendencies. He was bumped from the most-wanted list in 1977, according to the FBI’s website. One of the shooter’s brothers, Bruce Paddock, said that while their father was a bank robber, Stephen was “law abiding.” “He never got into fights. He never did anything violent. He’s kinda laid-back, never in a hurry,” Bruce told NBC News. “I don’t know how he could stoop to this low point, hurting someone else … He killed a bunch of people and then killed himself so he didn’t have to face whatever it was. “Paddock added that his brother was “not mentally deranged. He’s quite smart.” Source: NBC News

Like Father, like Son, he was a Psychopath and had Suicidal tendencies evidenced by him killing himself before Swat stormed in. Or did he? Perhaps he was killed as he was now used up just like a discarded hooker!  The brother said he was “not mentally deranged. He’s quite smart.”  Well, the brother was wrong!

Proof he had Mental Problems: Stephen Paddock was taking psychiatric medications that increase killing behavior by 45%

“Stephen Paddock, who killed at least 58 people and wounded hundreds more in Las Vegas on Sunday with high-powered rifles, was prescribed an anti-anxiety drug in June that can lead to aggressive behavior,” reports the Las Vegas Review-Journal:

Paddocks Girlfriend: “He Would Lie in Bed Moaning and Screaming, Oh my God”

NBC News – Marilou Danley, the woman investigators hoped would provide key details into the motive behind her boyfriend’s deadly shooting attack, said she remembers him exhibiting symptoms such as lying in bed and moaning, according to two former FBI officials who have been briefed on the matter.

“She said he would lie in bed, just moaning and screaming, ‘Oh, my God,'” one of the former officials said.

The brother, Eric Paddock, rambles on in a new interview. Is he just as much a wacko as his father and now deceased killer brother?

News Wars – Eric Paddock, brother of Las Vegas mass murderer, Stephen Paddock, delivered a second interview to reporters that has created more questions that answers, with many saying his behavior and statements were bizarre and cast more doubt on the case as a whole.

In a 33-minute conversation that CBS has called “rambling,” a clearly unbalanced Eric Paddock went “off the rails” according to TMZ.

Throughout the interview, Eric fixated on “Steve’s” seemingly immense wealth, referencing it many times, as well as his brother’s penchant for taking his friends and family on extravagant outings costing “thousands of dollars.” He repeatedly asserted that Steve made his fortune gambling professionally, specifically saying that Steve viewed gambling as “work,” and the casino as his home, where he got paid for “playing slots.”  See the rest of text here.

As you can see, Mental problems run in the family and that folks is caused by Satan and Sin! There is a curse on this family due to the Sins of the Father.

Who warned concert-goers they were “all going to die” a full 45 minutes before the shooting started?

The Powers of Darkness which control the Deep State, CIA, FBI,  and the world, like to broadcast their coded messages while toying with peoples’ lives. They get a thrill from this game-playing. Some say it is due to their own set of ethical standards, if one can believe that.

The elites have a code of ethics according to the above quote by Lindsey Williams above. As a Baptist preacher, Williams spent time with the Luciferian’s, while serving as pastor, during the building of the Alaskan pipeline. You can view all his info at his website here.

They want a race war to start so they can declare martial law and confiscate all firearms. They want President Trump out of office so there is NO chance of the Crooks getting indicted, prosecuted and sent to prison. They want to Assassinate the President just as they did Kennedy, and have made as much said so!

Chucky Shumer made a Threat to Trump live on MSNBC: “Let me tell you: You take on the intelligence community — they have six ways from Sunday at getting back at you,” said Senate Minority Leader Chuck Schumer Tuesday evening on MSNBC after host Rachel Maddow. Source: Washington Examiner

CNN Analyst Phil Mudd on Trump: “The Government’s Gonna Kill This Guy”  CNN counterterrorism analyst and former CIA agent Philip Mudd said on air “the government’s gonna kill” Donald Trump because he disrespected the deep state. Mudd subsequently clarified that he meant the phrase metaphorically, but the comments have caused alarm amongst Trump supporters. “Let me give you one bottom line – as a former government official, the government’s gonna kill this guy,” said Mudd. Source: InfoWars

My opinion is the Government, the CIA, the Deep State, The Swamp Creatures are responsible and this is a False Flag Event!

For sure, the truth WILL come. It will just take time. Check back for updates below.

Police: Stephen Paddock Was ‘Not Alone’ In Hotel Room

Stephen Paddock: intimate knowledge of the Second Amendment – had a huge gun room – made to order weapons that cost thousands of dollars