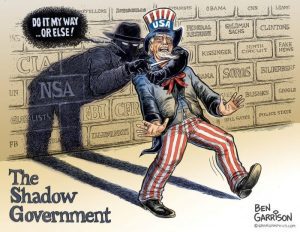 Just like Gate Keepers Rush Limbaugh, Sean Hannity and the rest of the GOP boot lickers did with with the CFR, Bohemian Grove, and other Deep State Organizations!! If these Clowns did not protect them years ago, we would NOT be in the situation we are in today!! The New York Times has gone from insisting the deep state “doesn’t exist” to admitting it’s real but insisting it’s totally awesome and here to “rescue the Republic” from Dronald Blumpf.

Michelle Cottle writes in the New York Times, “They Are Not the Resistance. They Are Not a Cabal. They Are Public Servants,” subheadline, “Let us now praise these not-silent heroes”:

President Trump is right: The deep state is alive and well. But it is not the sinister, antidemocratic cabal of his fever dreams. It is, rather, a collection of patriotic public servants — career diplomats, scientists, intelligence officers and others — who, from within the bowels of this corrupt and corrupting administration, have somehow remembered that their duty is to protect the interests, not of a particular leader, but of the American people.

Fiona Hill, Michael McKinley and the whistle-blower who effectively initiated the impeachment investigation — when these folks saw something suspicious, they said something. Their aim was not to bring down Mr. Trump out of personal or political animus but to rescue the Republic from his excesses. Those who refuse to silently indulge this president’s worst impulses qualify as heroes — and deserve our gratitude.

[…] For the sake of the nation, the American public should be clamoring for more patriots to join the conspiracy.

Michelle Cottle is a member of the editorial board.

Unelected intelligence agents like the phony CIA “whistleblower” are here to “rescue” us through an administrative coup to ensure President Trump cannot follow through on the campaign promises he was democratically elected on such as pulling out of the Middle East or making peace with Russia.

This is the system just as our Founders intended!