It won’t be long before the suicide bombings and beheadings start. They are being praised by the Coven Members.

The Terror Cells are just chomping at the bit—waiting for the attack orders from the Obama – Soros Cabal!

Maybe they are waiting for the Communist Traitors to get in power—so they can reign terror—and not worry about being prosecuted!

BTW, they are NOT Migrants —THEY ARE INVADERS! 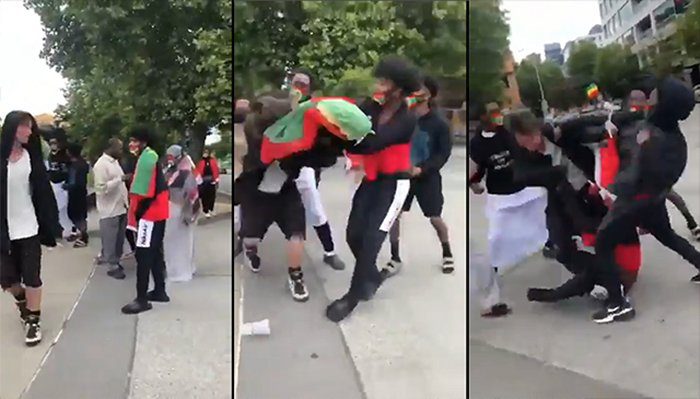 Chris Menahan | Information Liberation – Viral video out of Seattle shows a mob of African immigrants assaulting a white man in the street while screaming racial epithets and proudly flying the flag of the terrorist separatist group the Oromo Liberation Front.

Oromo Liberation Front
The Oromo Liberation Front is a political party established in 1973 by Oromo people in Ethiopia who believe that the Oromo people constitute a separate nation. The movement is the culmination of over 70 years of uncoordinated resistance by Oromos against Ethiopia’s central government. The OLF has offices in Addis Ababa, Washington, D.C. and Berlin from where it operates Amharic and Oromo-language radio stations. Source: Wikipedia

The mob is seen swarming the man — outnumbering him around 7 to 1 — and punching him repeatedly and kicking him while he’s on the ground as shocked onlookers scream in horror.

Yo, what the hell is happening in Seattle? Who are these people with the flags? pic.twitter.com/wMadK4J6yV

They are Oromo extremists targeting Ethiopian Christians& non-Oromo Ethiopians.Back in Ethiopia, they killed thousands of people(burned alive & slaughtered).They burned down churches & businesses. At the same time they protest in USA to show the western as they are "the victims". pic.twitter.com/ldJfgT7QCY

The youth didn’t attack the young man out of anger. It’s a result of deep rooted extremism and hatred for non-Oromo and/or Christians whom they label “neftegna”. Witness stated they called the young white man “you’re also neftegna” when they attacked him. https://t.co/lUIBGNvY2P

My comment on this next one: These three Bitches are the type Ilhan Omar wants to bring into the country. That is why she has introduced the Neighbors Not Enemies Act

Representative Ilhan Omar has introduced a bill attempting to remove the legal justification for what she calls President Trump’s “Muslim ban.”

The move comes as the President has vowed to expand the travel ban (it’s actual and accurate description) to include other nations who fail to implement proper security precautions when allowing residents to travel to the United States.

“We do not want to import terrorism or any other national security threat into the United States,” White House spokesman Hogan Gidley explained.

Omar, it seems, does not concur and she vows to stop this plan by eliminating the Alien Enemies Act. Read more here

Again, the “Muslim ban” is to keep out trash like these these, their ILK and scum like Ilhan Omar and her terrorist cohorts!

The assault was complete ignored by the media and was only picked up by an Ethiopian site Borkena which opposes the Oromo separatist movement.