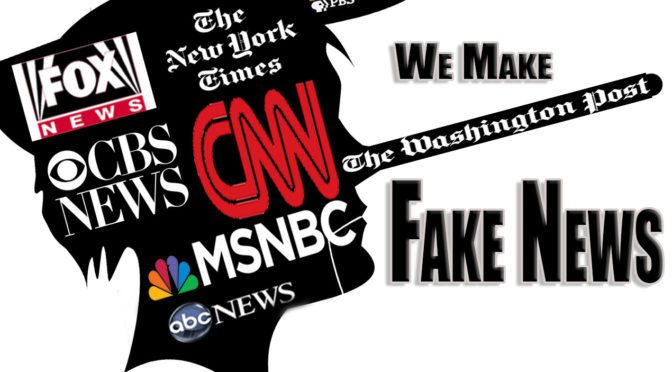 In January 2019, Glenn Greenwald over at The Intercept did a fantastic job scathingly documenting “The 10 Worst, Most Embarrassing U.S. Media Failures on the Trump-Russia Story,” during President Trump’s first two years of presidency, but rather than learning from their “most embarrassing” failures, in 2019, they pushed even more mortifying and humiliating “fakes news,” hoaxes, all stemming from the MSM’s collective Trump Derangement Syndrome (TDS).

Greenwald wrote back then:

But in homage to BuzzFeed’s past viral glory, following are the top ten worst media failures in two-plus-years of Trump/Russia reporting. They are listed in reverse order, as measured by the magnitude of the embarrassment, the hysteria they generated on social media and cable news, the level of journalistic recklessness that produced them, and the amount of damage and danger they caused. This list was extremely difficult to compile in part because news outlets (particularly CNN and MSNBC) often delete from the internet the video segments of their most embarrassing moments. Even more challenging was the fact that the number of worthy nominees is so large that highly meritorious entrees had to be excluded, but are acknowledged at the end with (dis)honorable mention status.

Like Greenwald, when putting together the list below, it was difficult to choose which media humiliations were the worst in my mind, and others will undoubtedly have certain examples that they feel were more mortifying than others, and readers are encouraged to add their examples in the comment section below.

While compiling the list below, what struck me as very interesting is that even the inaccurate, fake news and outright hoaxes the media perpetuated on the American public that did not directly involve Russia, Ukraine, impeachment, or President Trump, all stemmed from the liberal establishment media’s own biases and their sheer determination to turn every disturbing story into an “Orange Man Bad” narrative. What the media did to the Covington Catholic students tops the list because not only did their TDS cause them to report a narrative with absolutely no investigation or research, but they defamed these young students to the point where they received death threats online and offline.

Long story as short as we can make it: On January 18, 2019, a bunch of Covington Catholic students were at the Lincoln Memorial where they were being harassed by a group of Black Hebrew Israelites. An elderly Indian man, Nathan Phillips then approached the students, walking straight into the group of them, pounding his drum in one of the students face.

The initial selectively edited clip that instantly went viral on social media made it look quite different than what the entire video showed, falsely portraying the students as aggressors.

Washington Post headline: ‘It was getting ugly’: Native American drummer speaks on the MAGA-hat wearing teens who surrounded him.

The media jumped on that narrative without doing even the basic amount of confirmation and verification, yet when the full video was published and by the time the entire big picture had emerged, two days after the actual incident, some media outlets refused to correct their original reporting.

The Covington student is now suing multiple media outlets, including Washington Post, NBC Universal and CNN and tens of millions of dollars.

The reason the media jumped so hard and so fast on their preferred narrative is evidenced by how the majority of the reporting all highlighted that the students were wearing “MAGA” hats, so destroying their lives was more important to the media than investigating and reporting the truth. because “ORANGE MAN BAD!”

Actor Jussie Smollett claimed that two white men, wearing a MAGA hat attacked him at around 2 am as he was heading home from a Subway with a meal. He claimed they slung racial and homophobic slurs at him and screamed “This is MAGA country.”  Every liberal media outlet simply reported the whole episode as if it were already confirmed and verified, using it to fit their preferred narrative that Trump supporters are violent and racist.

Police on the other hand, spent many, many man hours actually investigating the “crime,” going over camera footage and eventually found that the “attackers” were actually friends of Smollett that he had hired to fake his own hate crime attack.

This is yet another example of the liberal establishment media, so infected by Trump Derangement Syndrome, that even after conflicting reports came out, even after unbiased and objective individuals and writers were encouraging people to wait for the police investigation to conclude because Smollett’s story was falling apart, the media simply couldn’t stop pushing what was increasingly looking like a false narrative, for weeks.

Why? Because Orange Man Supporters’ Are BAD!

For over three years the liberal establishment media pushed the “Russia Collusion” hoax upon the American people, some outlets like CNN and MSNBC covered so aspect of it every single day, sometimes multiple times a day.

We saw predictions from former Obama intelligence community heads that “indictments” against the Trump family were imminent.

We were told by MSNBC’s Rachel Maddow and others that the Steele Dossier was confirmed, verified as they actively rooted for it to be true,. as explained by the Washington Post media critic, Erik Wemple in a brutal look back at media coverage of the Steele Dossier and how the media botched the entire story.

Then Special Counsel Robert Mueller issued his report after a nearly two year investigation into the Russia collusion issue and found that no Trump official, or any American, “conspired” or “coordinated” with Russia to interfere in the 2016 election.

In other words… no collusion was found.

The media reported on it, spun those findings as not conclusive, pivoted to “obstruction,” before jumping on the new fake scandal… UKRAINE and IMPEACHMENT!! While Sharyl Attkisson documents 43 media “mistakes” just in 2019, and many of them truly deserve a spot on the top 5, the Telegraph managed to publish a story that did not just make one or two little “mistakes,” but had to issue a correction acknowledging that the article “should not have been published,” and that it “contained a number of false statements. Of course other stories, fake news and hoaxes are more important than a member of the Trump family being attacked as the writer for the Telegraph did with Melania, since the media attacks them any chance they get, but it is rare that one story contains that many direct and deliberate false statements and fake news, so humiliation-wise, this ranks right up there in the top four in my opinion.

Donald Trump has broken the media.

The liberal bias of the so-called mainstream media has been obvious for years, pre-dating the Trump candidacy and presidency, but the level of vitriol shown by the MSM towards President Trump, his family and his supporters because of their blatant Trump Derangement Syndrome has reached an unprecedented levels, where truth means nothing… only destroying the President Trump and anyone that supports him.

Please Visit All News Pipeline and support them!