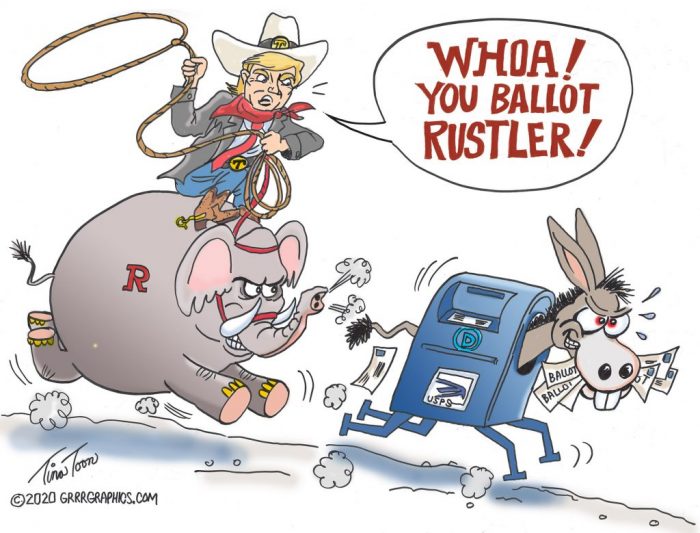 Tina Garrison – The real issue is the Democrats push for “cheat by mail” the only way they can steal the election!

Just like all the other hoaxes they pushed in the last 3 1/2 years, the Great Mail Box Hysteria of 2020 is just another attempt to keep Trump from being reelected.

In reality, mailboxes are ALWAYS being removed or moved around..that’s what the USPS does. At least 14,000 were removed during the Obama-Biden administration and no one even noticed!  But Orange Man is a tyrant! Bad Orange Man bad!

The boring truth is that the US Postal Service is losing money and low volume mailboxes are regularly removed to cut costs. Orange man had nothing to do with it!

The REAL issue is the Democrats are pushing for mail in voting, the easy way to steal an election! If you can protest in person and shop at the grocery store, then you can vote in person!

Now you know the “rest of the story”.  Tina

So just WHO DID remove over 14,000 mail drop boxes? Why none other than the Illegal Muslim Barack Hussein Obama and his flunky Creepy Joe Biden!!

CLAIM: President Donald Trump is trying to rig the 2020 election by removing mailboxes so people can’t vote by mail.

VERDICT: FALSE. The removal — and replacement — of mailboxes is a constant part of U.S. Postal Service operations.

Joel B. Pollak | Breitbart News – Democrats are trying to claim that President Trump is crippling the U.S. Postal Service because he opposes universal vote by mail, and that the removal of mailboxes in several locations throughout the country is evidence of that evil intention.

Former Vice President Joe Biden, the presumptive Democratic Party nominee for president, gave credence to that conspiracy theory on Saturday: “I wonder if you’re outside trying to hold down your mailboxes. They’re going around literally with tractor trailers picking up mailboxes. You oughta go online and check out what they’re doing in Oregon. I mean, it’s bizarre!” he said.

But there is nothing nefarious about removing mailboxes: Biden did it himself.

More specifically, the Obama-Biden administration removed 14,000 mailboxes over the five fiscal years ending in 2017, according to the U.S. Postal Service Inspector General.

More were likely removed before that. In 2009, cost-cutting was urgent at the postal service, with the postmaster general considering reducing delivery to five or even three days per week.

As the Blaze and others noted, mailboxes are removed from locations where they are underutilized, and either retired or relocated elsewhere.

“It is a fluid process and figures can vary from day-to-day,” Frum said. “Historically, mail boxes have been removed for lack of use and installed in growth areas.”

“When a collection box consistently receives very small amounts of mail for months on end, it costs the Postal Service money in fuel and workhours for letter carriers to drive to the mailbox and collect the mail. Removing the box is simply good business sense in that respect. It is important to note that anyone with a residential or business mailbox can use it as a vehicle to send outgoing mail.”

The claim that removing mailboxes is somehow an attempt to steal the election is nothing more than a conspiracy theory, as Breitbart News noted — one that is being pushed by Democrats to motivate voters, and excuse a possible 2020 defeat.

In any case, the U.S. Postal Service has halted the removal of mailboxes until after the election, to avoid controversy.