Humm…, she, or IT, dose not look Black or Indian? Looks like your ordinary white hussy to me!

Also note the other idiots in the background. An Old White Catholic Priest donning African Garb, another white idiot with a bandana over his face, and Black person with an “I can’t breath” mask on. Well that the damn mask of you idiot and you can breath! 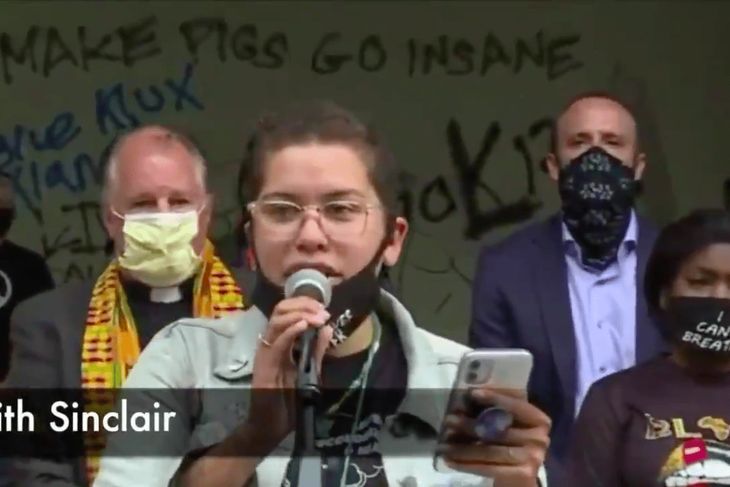 PJ Media – On Friday, before the fiftieth night of violent antifa riots, a protester who identified herself as an “Afro-Indigenous non-binary local organizer” declared that she is advocating for the abolition of “the United States as we know it.” This brief declaration arguably encapsulates the destructive spirit of antifa and the impetus behind the violent riots that have ravaged the streets of Portland.

“My name is Lilith Sinclair, I’m an Afro-Indigenous non-binary local organizer here in Portland, organizing for the abolition of not just the militarized police state but also the United States as we know it,” Sinclair declares in a brief video that went viral on Twitter. She also called Portland “stolen land,” proceeding to give Native Americans a “land acknowledgment.” By the way, she also identifies herself as a “sex worker,” i.e. a prostitute.

By “Afro-Indigenous,” Sinclair likely means she has black and Native American ancestors. By “non-binary,” she insists that she does not fall into the binary understanding of biological sex as male or female. In an interview with the Portland Mercury last month, Sinclair argued that Americans have to deconstruct the “colonized thought” that white oppressors supposedly foisted upon racial minorities.

“We’ve been working to heal these intergenerational wounds of colonization and genocide for generations. But there’s still a lot of work to undo the harm of colonized thought that has been pushed onto Black and indigenous communities,” Sinclair told the newspaper. “That’s in regards to Christianity, and in regards to all of these different types of oppressive systems that have introduced and enforced the gender binary on communities that did not ascribe to that way of thinking, including indigenous communities both Native American and across Africa.”  Read more at PJ Media