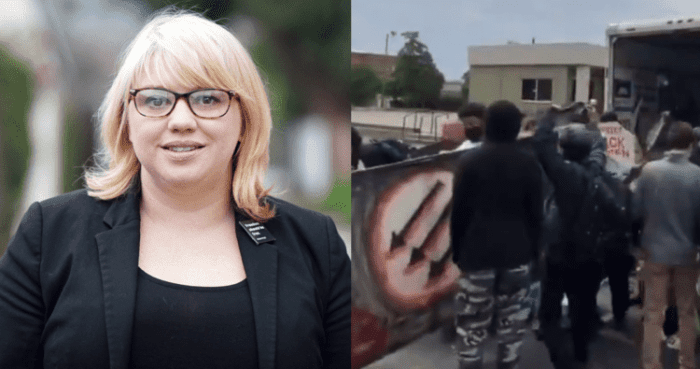 Jack Hadfield – Holly Zoller, a “bail disruptor” for the Soros-linked Bail Project, rented and drove the truck that handed out shields to potential rioters in Louisville.

National File reported earlier today that a U-Haul truck was used to distribute equipment, including shields, to potential rioters in Louisville, who are protesting the grand jury decision in the Breonna Taylor case.

Intelwave, a Twitter account that has been gathering information on “protests, riots and chaos,” along with the group Third World Fight Club, were able to track down the identity of the driver, Holly Zoller. Zoller is a “bail disruptor” for the Bail Project, an organization that opposes cash bail, and claims that paying bail for those in jail is an “act of resistance against a system that criminalizes race and poverty.”

According to her bio on the Bail Project’s site, Zoller is the founder of Louisville Books to Prisoners, “a nonprofit organization aimed at putting books into the hands of people living behind bars.” More crucially, it says that Zoller has “organized around anti-fascist movement,” and has worked as “a professional organizer.”

One member of the anonymous group called Zoller, posing as a U-Haul employee, noting that the company had seen “hundreds of Twitter posts” about the U-Haul truck “being used to protest illegally.”

“We handed out supplies. That’s it,” Zoller said, including “umbrellas, water, masks, goggles, gloves.” The caller says that they saw signs of” abolish the police,” to which Zoller said that was her First Amendment right.” What does it matter what I posted on a sign?” she added.

Zoller then denied that she protested, but then was caught admitting that she “drove the U-Haul truck and dropped items off.” After saying this, Zoller goes quiet. When she returns to the call, she says the caller should talk to her lawyer and that she would not be answering any more questions.

Zoller has previously been photographed at the Charlottesville riots in 2017, wearing goggles and carrying a wooden stick of some sort.

The Bail Project also has ties to George Soros, the founder of the Open Society Foundation. At least two employees of the Bail Project are or were “Soros Justice Fellows.” According to the Open Society Foundation’s website, “the Soros Justice Fellowships fund outstanding individuals to undertake projects that advance reform, spur debate, and catalyze change on a range of issues facing the U.S. criminal justice system.”

The Bail Project also boasts a number of celebrities on its board of advisors, including entrepreneur and founder of Virgin Richard Branson, lawyer and legal commentator David Feige, actor Danny Glover, and musician John Legend.

National File will continue to follow and report on the disturbances in Louisville.