And the Majority Feel Fine! Remember that song?

A Generation of Brown Shirts!

No Relief In Sight: Food Prices Will Continue To Go Up

The End Of The World As We Knew It Has Already Happened, What Is Left Are Shortages, Outages, Anarchy And Chaos – Just Look Around At What Is Happening Right Now

We, and others, write about worst case scenarios, about how the time is coming where the world as we once knew it is gone, but a look around the nation right now, compared to a few years ago, makes it crystal clear that the days warned about for so long, are already here.

Recent headlines and the worsening of class, race and political warfare, along with deterioration of supplies, from gas to food, to lumber, to appliances and more, proves the point that “normal” doesn’t exist anymore, and we will never have what was normal just years ago, back again.

As certain Americans literally hunt every day for something to complain and whine about (Karens and Kevins), with many groups, such as Antifa and BLM actively looking for reasons to riot throughout the country, burning and looting businesses, vandalizing property, we see dire warnings that the majority of the liberal establishment media ignores to the point of keeping their audience ignorant of actual events.

Take Portland, Oregon for example and the competing headlines, enough to give someone virtual whiplash.

On May 16, 2021, Western Journal reported: “Portland Police Union President Reveals City Is on the Precipice of an All-Out Gang War.”

As we have documented extensively, Antifa is completely out of control in Portland, Oregon, terrorizing neighborhoods, blocking traffic, harassing and attacking innocent drivers just trying ot get from one place to the next, but we also see from the message by the Portland Police Union, that gang activity is also taking over the streets, mainly due to the defunding of police.

“Our elected leaders can no longer turn a blind eye and blame it on the pandemic. The surge in gun violence is directly related to the defunding of police—the Portland Police Bureau (PPB) is catastrophically understaffed, our specialty units have been disbanded, and our response time to calls for service has understandably increased.” 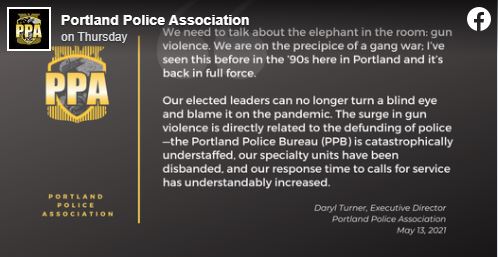 It is noteworthy to remind readers that the Mayor, Ted Wheeler, stood side-by-side with rioters, while they attacked a federal building, and was teargassed with those same rioters.

In January 2021, Wheeler admitted to his failure in dealing with Antifa and asked for state and federal help.

Portland Mayor Ted Wheeler admitted his policies in dealing with Antifa anarchists failed. He called for new enforcement actions and asked for federal and state assistance in dealing with the lawlessness.

“My good-faith efforts at de-escalation have been met with ongoing violence and even scorn from radical Antifa and anarchists,” Wheeler said in a New Year’s Day press conference. “In response, it will be necessary to use additional tools and to push the limits of the tools we already have to bring the criminal destruction and violence to an end.”

“It’s time to push back harder against those who are set on destroying our community and to take more risks in fighting lawlessness,” the Portland mayor continued.

Then after seeing his town hit the point of no return, decided to make a public plea (for optics it appears) to help stop Antifa goons from destroying the city.

Antifa then published a video doxxing the mayor with his home address, and then making veiled death threats.

Now compare that to a headline from Daily Mail, also dated May 16, 2021: “Portland mayor whose city was ransacked by rioters last summer says he’s ‘GRATEFUL’ to Biden for rescinding Trump order that enabled feds to quell violence.”

The guy is like a Yoyo or ping pong ball for heavens sake.

There are other city. states suffering the same type of failure of leadership, such as Seattle Washington where Antifa goons are constantly rioting while chanting “death to America.”

The only ones fighting back against this type of anarchy and chaos are conservative leaders.

Readers can decide for themselves why liberal leaders refuse to stand up to America hating terrorists.