Keep you eyes and ears open, your camera at the ready folks. The Lucie’s are getting desperate! 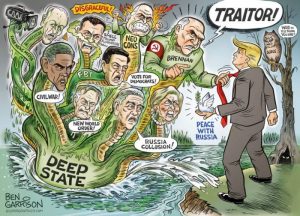 With The ‘Deep State’ A ‘Criminal Cabal’ Under Obama, Be Prepared For A Major False Flag Bash wasn’t the only one throwing the word ‘dangerous‘ around. As Big League Politics reports within this new story, Congressman Adam Schiff recently tweeted “the coverup has entered a new and dangerous phase” while calling President Trump’s actions, which amount to trying to get ‘the truth‘ to the American people “un-American“. “Since when is truth ‘un-American’?” asks this new story over at Victory Girls Blog.

While the White House released a statement and President Trump tweeted: “Today’s action will ensure that all Americans learn the truth about the events that occurred, and the actions that were taken, during the last Presidential election and will restore confidence in our public institutions”, the incredible damage done to long-standing US institutions such as the Department of Justice and the FBI by lies told to the American people by Democrats and the deep state for the past 2+ years (and how many years before that?) even have some calling for 9/11 to be re-investigated.

As Mike Adams reported just days ago over at Natural News, “now that we know the FBI is corrupt and treasonous, it’s time to revisit the ‘official narrative’ of 9/11 in search of the real truth“. As Adams warned, with the ‘deep state‘ under Barack Obama having proven itself to be nothing more than a ‘criminal cabal‘, we must remember that ‘the hammer‘ of corrupt government was quite literally dropped upon the American people shortly after that ‘event‘, with the Patriot Act passed and America turned into a nation bordering upon a wide open ‘police state‘. From Adams story.:

The FBI confiscated hundreds of security camera videos from the areas surrounding the Pentagon to hide the fact that the building was never struck by a commercial airliner (as was universally claimed by the fake news media). The videos have never been released to the public. The official story is a lie, just like the Russia collusion hoax. In truth, the Pentagon was struck by a cruise missile fired by a deep state-controlled rogue element of the U.S. military. It was a classic false flag attack.

The 9/11 attacks were allowed to take place in order to push through the Patriot Act which allowed the intelligence community to spy on political opponents and American citizens. This power was used by the Obama administration to illegally surveil Trump campaign officials and family members. The illegal spying operation was called “Operation Hammer,” and according to The American Report: 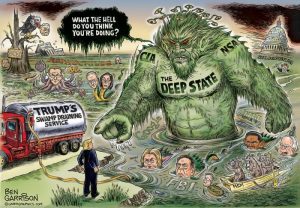 As we’ve long been warned, should the ‘deep state‘ which long ago sold out America for global government have to ‘face the music‘, we should all be prepared for a monstrous false flag event. And with Democrats in Congress now in an all-out panic mode as Susan Duclos had reported within this May 24th ANP story, we may soon be witnesses to the greatest take-down of a coup attempt against America and the American people that our country has ever seen. Think that an overstatement?

In this story over at Liberty Nation titled “Barr Given Green Light To Expose Deep State Plot“, they report that Attorney General William Barr has been given an extensive mandate to investigate just how deeply the deep state corruption had spread, with Trump’s memorandum sent to not only the CIA and Department of State but the Defense Department, Treasury Department, DHS, Department of the Energy and the DNI. Why would so many non-intelligence agencies also be involved?

We should pay attention to a statement recently put out by investigative journalist Sarah Carter who recently said that everyone should pay very very close attention to all of the agencies that President Trump has demanded cooperate with AG Barr. And with all of this unfolding now at a time when many Democrats really had long believed that their own ‘S‘ doesn’t stink, as the Liberty Nation story reports, it’s now time to tell the other side of the story. Is that why some senior Democrats are melting down?

Rep. Adam Schiff (D-CA), who for two years has been saying that he had seen conclusive evidence of collusion between Trump and Russia, is furious that the American people will soon know the truth behind the collusion story. “While Trump stonewalls the public from learning the truth about his obstruction of justice,” Schiff wrote in a tweet, shortly after hearing about the memorandum, “Trump and Barr conspire to weaponize law enforcement and classified information against their political enemies. The coverup has entered a new and dangerous phase. This is un-American.”

The congressman is claiming the exact opposite of what has actually happened. With the exception of grand jury testimony, all the information pertaining to alleged obstruction by the president is available. Weaponizing law enforcement and classified information for political purposes is exactly what the Obama administration did in 2016. Schiff is now terrified at the prospect of the American people being exposed to the truth. In this must read new story over at Milne News which Whatfinger had linked to on their website on Friday, Milne gives us one of the best break downs of false flag operations that have been carried out in the US that we’ve read in a long time.

Beginning their story with a quote by former US President John F. Kennedy, their story seemlessly ties false flags to Anderson Cooper, the CIA, CNN and Operation Mockingbird and helps to prove how the mainstream media helps to create an ‘alternative reality‘ that is geared to shift public perceptions to their point of view.

Nothing short of Orwellian, with CIA agents embedded within the mainstream media as ‘journalists‘, spinning for us their ‘alternative reality‘, the American masses will soon learn with the declassification of government spying docs just how much we’ve been lied to.

JFK once warned the world that the “dangers of excessive and unwarranted concealment of pertinent facts far outweigh the dangers which are cited to justify it.” He also said that “there is a very grave danger that an announced need for increased security will be seized upon by those anxious to expand its meaning to the very limits of official censorship and concealment.”

“National security” is now a blanket term used to justify concealing information, but who makes these decisions?

False information or “fake news” if you will are routinely dispersed by mainstream media outlets — a reality that is clearly conveyed in this declassified CIA Document and has been exposed by multiple mainstream media journalists themselves.

And as shown with the NSA surveillance program that was exposed by Edward Snowden, it’s a global problem.

And as their story detailed for us in the next section excerpted below, the masses are being herded in a specific direction.

“Most terrorists are false flag terrorists, or are created by our own security services. In the United States, every single terrorist incident we have had has been a false flag, or has been an informant pushed on by the FBI. In fact, we now have citizens taking out restraining orders against FBI informants that are trying to incite terrorism. We’ve become a lunatic asylum.”

Operation Mockingbird is a program developed by the CIA to infiltrate mainstream media and feed them stories that suit the narrative of the agency for ‘national security’ purposes.

Operation Mockingbird was actually birthed out of the Office for Strategic Services (OSS), which, during the Second World War, established a network of journalists and psychological warfare experts. Back then, these were propaganda campaigns or as we call them now, fake news campaigns. As Gateway Pundit had reported within this May 19th story, “one of the many illegal actions that President Obama partook during his eight years in office was the assimilation of personal data on all Americans. His ‘Operation Hammer’ will soon be uncovered and show his contempt for Americans and the rule of law.”

Greg Hunter’s USA Watchdog had also recently reported that massive Obama deep state crimes will soon be revealed and prosecuted but with countless Obama deep state operatives still within government, not yet weeded out from their positions with Democrats dominating the majority of US intelligence agencies according to this April Washington Free Beacon story, all eyes should be open and Americans prepared for anything as ‘the hammer‘ that was supposed to come down upon President Trump instead comes down upon the corrupt.

So let’s take an extended look from this Gateway Pundit story on how the ‘Russian collusion investigation‘ was born.

Obama’s illegal initiative labeled “Operation Hammer” was in full force in March 2016, via Mary Fanning and Alan Jones at the American Report: FBI Deputy Assistant Director of the Counterintelligence Division Peter Strzok and his supposed paramour,

The Hammer is the Stasi-like secret surveillance system created by CIA/NSA/FBI contractor-turned-whistleblower Dennis L. Montgomery for Obama’s intelligence chiefs, CIA Director John Brennan and Director of National Intelligence James Clapper. The Hammer, under the Obama administration, negated every American’s constitutional rights to privacy, turning the United States into a police state where the federal government was weaponized by the Obama administration against its political enemies.

Only a few hours earlier, General McInerney had referenced Montgomery and Klayman on “Operation Freedom,” exactly the same names about which Strzok and Page were now texting.

The next morning, the Russian Collusion investigation was born.

Posted with permission from All News Pipeline