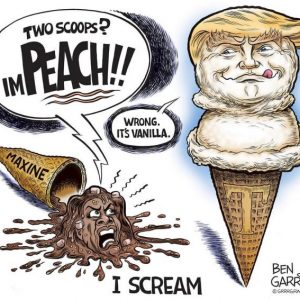 “I resent that and I resent the remark about making America great again.” “He’s down here making a speech for this dishonorable president of the United States of America. One thing you can say for certain is that Maxine Waters is full of hate and contempt for any one who is NOT a Communist or … Click here to Read more

Being a Brain Dead Idiot may soon history only to be read about in history books! Experts excited by brain ‘wonder-drug’  – Scientists hope to stop all neurodegenerative diseases, including dementia Proverbs 26:3 “A whip for the horse, a bridle for the ass, and a rod for the fool’s back.” (BBC News) Scientists hope they … Click here to Read more

Steve Watson Prison Planet.com January 17, 2017 – A Democratic Congresswoman has called for Donald Trump to be impeached on the grounds that he coined the term ‘crooked Hillary’ in collusion with the Russian government, even suggesting that the Kremlin was feeding Trump such lines to use during his campaign.